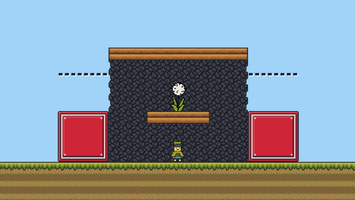 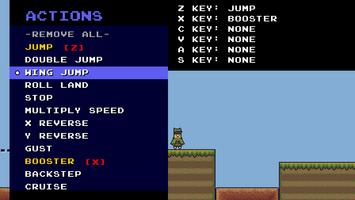 One of the first things I wanted to do was to get objects moving around in various ways for levels and challenges, so this update features a small demo area in the hub with various dynamic elements in it. Pollen, platforms, and even float-space can now be moved around during and outside of challenges. Movement types include moving between set positions, radial orbiting, snake trails, and mirroring the players movement (not shown in level).

Additionally, there are now spawners that can continuously create pollen and platforms, as well as 'destroyers' which can remove them at set positions. Normally the game will count up all the pollen in an area and use that number as the 'max' number of pollen you can get, but in this situation the game knows to account for dynamically created pollen and opt out of adding it to the total pollen count and will instead use the preset requirement amount associated with the challenge.

-There's now a panel that can force the player to do one of their movement actions whenever the player touches it, though I didn't do anything with this in the test area.

Plans for next update:

-Integrate a point-system for equippable actions and characteristics where you'll have to pick and choose which abilities you want applied.

-A loadout system where you can make preset packages of various abilities that are easy to switch between.